is cyberwar and drug war the newest “public humiliaton” entertainment arena? why? how logn will it last? who publily will say they know about it?

Public humiliation is the dishonoring showcase of a person, usually an offender or a prisoner, especially in a public place. It was regularly used as a form of punishment in former times, and is still practiced by different means in the modern era.

In the United States it was common in the 19th century and fell out of common use in the 20th century, though it has seen a revival starting in the 1990s.[1] 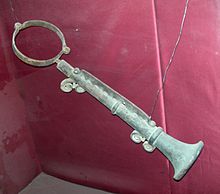 Flute of Shame displayed at theTorture Museum in Amsterdam.

Man and woman undergoing public exposure for adultery in Japan, around 1860

Paris 1944: French women accused of collaboration with Nazis had their heads shaved and were paraded through the streets barefoot

Public humiliation could take a number of forms. Most often a criminal was placed in the center of town and having the local populace enact a form of “mob justice” on the individual. The punishment of public humiliation could be, amongst other things, an offender being forced to relate his crime, such as by exaggerated physical parody: a ‘shame flute‘ for a bad musician or wearing a giant rosary (Dutch:schandstenen, “stones of shame”) for someone late to church. The offender could alternatively be sentenced to remain exposed in a specific public place, in a restraining device.

In the Low Countries, the schandstoel(“Chair of shame”), the kaak orschandpaal (“pole of shame”, a simple type of pillory), the draaikooi were customary for adulteresses, and theschopstoel, a scaffolding from which one is kicked off to land in mud and dirt).

In the more extreme cases being subjected to verbal and physical abusefrom the crowd, which could have serious consequences especially when the hands are not free to protect himself. Some sentences actually prescribe additional humiliation, such as shaving, or combine it with painful corporal punishments, see below.[2]

In pre–World War Japan, adulterers were publicly exposed purely to shame them.

In post-Colonial times, judicial use of public humiliation punishment has largely fallen out of favor since the practice is now considered cruel and unusual punishment, which is outlawed in the United States Constitution.[3]

In India, public humiliation (especially of women) is still practicised, often involving stripping and beating the victim. Reasons may include (real or alleged) murder, non-payment of dowry, witchcraft, or inter-caste marriages.[4]

In Siam, an adulteress was paraded with a hibiscus behind the ear. Thieves were tattooed on the face. Other criminals were paraded with a device made of woven cane on the forehead, or lengths of bamboo hung around the neck. Errant Brahmans had to wear a string of oversize beads.

Just like painful forms of corporal punishment, it has parallels in educational and other rather private punishments (but with some audience), in school or domestic disciplinary context, and as a rite of passage. Physical forms include being forced to wear some sign such as “donkey ears” (simulated in paper, as a sign one is—or at least behaved—proverbially stupid), wearing a dunce cap, having to stand, kneel or bend over in a corner, or repeatedly write something on a blackboard (“I will not spread rumors”, for example). Here too different levels of physical discomfort can be added, such as having to hold heavy objects, go barefoot (see below) or kneel on an uneven surface. Like physical punishment and harsh hazing, these have become controversial in most modern societies, in many cases leading to legal restrictions and/or (sometimes voluntary) abolishment.

Having the head shaved can be a humiliating punishment prescribed in law,[5] but also something done as “mob justice” – a stark example of which was the thousands of European women who had their heads shaved in front of cheering crowds in the wake of World War II,[6][7] as punishment for associating with occupying Nazis during the war.

Forcing people to go barefoot has been used as a relatively effortless and more subtle form of humiliation in most past and present civilized cultures, primarily using the visual contrast to the standard form of appearance while also creating some level of physical discomfort. The exposure of bare feet often served as an indicator for imprisonment and slavery throughout ancient as well as modern history.[8] Even today prisoners officially have to go barefoot in many countries of the world and are also presented in court and showcased to the public unshod.[9][10][11][12][13][14][15] As shoes are commonly worn by all social classes since antiquity in most civilized societies, showcasing a captive to the public in bare feet traditionally symbolizes the person’s loss of social standing and personal autonomy. It usually also causes a considerable degree of humiliation, as this noticeable detail typically sets the prisoner apart from spectators visually and demonstrates the person’s vulnerability and general powerlessness.

Further means of public humiliation and degradation consist in forcing people to wear typifying clothes, which can be penitential garbs or prison uniforms.

Presenting arrestees or prisoners to the public in restraints (such as handcuffs,shackles or similar devices) also serves as a convenient method of public humiliation besides the primal security aspects. The effect is complemented by presenting the person in a prison uniform or similar clothing. 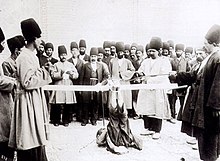 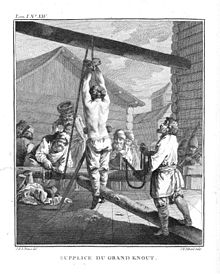 Apart from specific methods essentially aiming at humiliation, several methods combine pain and humiliation or even death and humiliation. In some cases, pain or at least discomfort is insignificant or rather secondary to the humiliation.

The simplest is to administer painfulcorporal punishment in public – the major aim may be deterrence of potential offenders – so the public will witness the perpetrator’s fear and agony. This can either take place in a town square or other public gathering location such as a school, or take the form of a procession through the streets. This was not uncommon in the sentences to Staupenschlag (whipping orbirching, generally on the bare buttocks) in various German-speaking states, till the 19th century. A naval equivalent wasFlogging round the fleet on a raft taken from ship to ship for consecutive installments of a great total of lashes, that could even be lethal. In some countries the punishment of foot whipping is executed in public to this day. 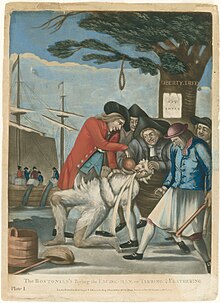 The humiliation can be extended; intentionally or not; by leaving visible marks, such as scars, notably on body parts that are normally left visible. This also serves as a virtually indelible criminal record. This can even be the main intention of the punishment, as in the case of scarifications, such as branding. It invariably is essential in forms of mutilation, such as ear cropping, though the functional loss is even greater; pain may even be intentionally minimized as in the case of surgical amputation, eliminating the risk of accidental death.Tarring and feathering also serves as means of extended humiliation.